Charging an iPad, iPhone, or iPod

I needed to charge an iPad, but I couldn’t do it the “normal” way because it was stuck in a wall! I had mounted 2 iPads in walls at a customers house. I did this by cutting a big iPad sized hole in the wall, and then building a custom mounting dock for it. I also embedded an arduino bootloaded ATmega 328 in there along with a MAX3232 (RS232 to TTL) chip for controlling the iPad via RS232. Now all I had to do was keep it charged. I found Ladyada’s mintyboost resources a huge help. She even has a video on Reverse engineering Apple’s secret charging methods. With her video and mintyboost page, I was able to build a working charging circuit that has worked perfect since December of 2010.

On a side note, you may ask yourself why would anyone put an iPad in a wall? Well, it serves as a lot of cool things, but the main one is to control the home automation systems I install. And an iPad is about the same price (with my dock) as a touchscreen the automation company sells. The automation system controls HVAC, lighting, security, audio (multi room/source), video, intercom, and also have close contact output as well as 5 RS232/485 ports, Ethernet, and telco connectivity. I’ll have to show off my automation system one day, it’s really an amazingly flexible system.

Why not just use the stock iPad charger? Because I don’t do cheesy. Apple chargers are cheesy? No, of course not. I will not tolerate any wires in plain sight at a customer installation. Ever. And I have seen a number of on wall (not in wall) iPad docks that have a wire going down to an outlet. Let’s just say, that’s not my style. NEC code does not allow for exposed high voltage inside a wall, like an outlet with an Apple charger sticking out. So the answer was to build my own solution with low voltage only. For power, I used 2 5v 2A power supplies from Adafruit.

Here is a shot of the end result. The wow factor is there with authority. 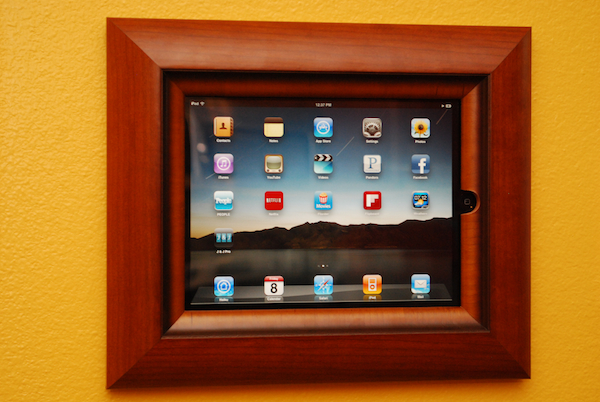 Here is the schematic: 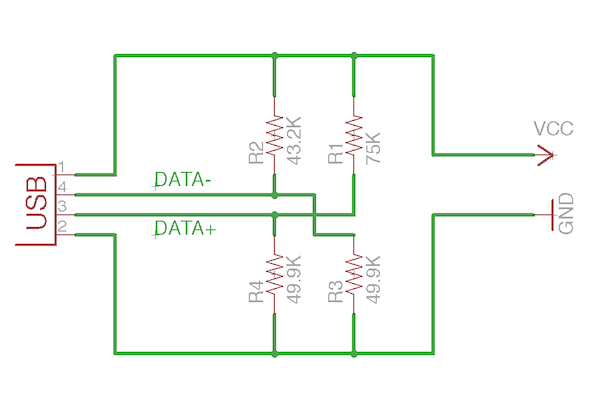 17 Responses to Charging an iPad, iPhone, or iPod

This website uses cookies to improve your experience while you navigate through the website. Out of these cookies, the cookies that are categorized as necessary are stored on your browser as they are essential for the working of basic functionalities of the website. We also use third-party cookies that help us analyze and understand how you use this website. These cookies will be stored in your browser only with your consent. You also have the option to opt-out of these cookies. But opting out of some of these cookies may have an effect on your browsing experience.
Necessary Always Enabled
Necessary cookies are absolutely essential for the website to function properly. This category only includes cookies that ensures basic functionalities and security features of the website. These cookies do not store any personal information.
Non-necessary
Any cookies that may not be particularly necessary for the website to function and is used specifically to collect user personal data via analytics, ads, other embedded contents are termed as non-necessary cookies. It is mandatory to procure user consent prior to running these cookies on your website.
SAVE & ACCEPT