Give some knowledge away!

I bought my son a electronics snap kit about 2 years ago, and quickly completed some projects that were in the included book. This was fun for us, a good start, but there was more. I began teaching him about series and parallel circuits, passive components, and different types of sensors. I then said, “Without looking at the book, build a flashlight. OK, good, now build a fan with a switchable light. OK, now build a…”

This was a blast. I see great value in teaching him why circuits do what they do so he is armed with the knowledge to create. I mean, sure it’s great to build something that someone else designed, but there is no joy like watching your creation come to life. This is what inventing/hacking is about! I would encourage you to teach your little ones a solid foundation, so that they are able to build great things on it. Blinking LED’s first, then microcontrollers, then..?? They are the next engineers! 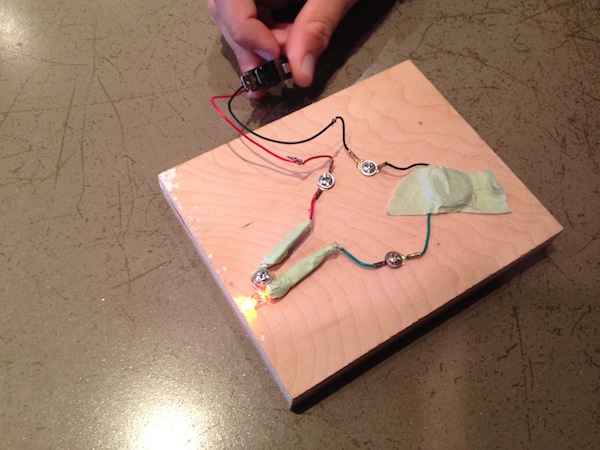 I was recently at a job where I saw a 10 year old boy I had given some parts to about 6 months ago. I gave him a handful of LED’s, a 2032 cell, a few resistors, and advice on what to do and not do with them. This advice included not directly hooking up an LED to a 9V battery, as well as a short lesson about voltages and current. When I saw him last week, he had informed me that, with the LED’s I’d given him, he made a circuit for his science class and won a prize! He also let me know that he followed my advice and all of his LED’s were still working. His mom then directed my attention over to a Christmas manger scene where the star was now lit up by an LED. I told him that I would get some more LED’s/sensors in his hands asap, and some more advice on how they work. I can’t wait to see what he does next.

2 Responses to Give some knowledge away!