OK, sometimes your brain gets a little fried on a project and you need to decompress a little right? That happened a little while ago, and here is the result. I have this awesome little 10th scale 40mph+ Losi stadium truck I play with now and then, and I have always wanted to do this. While the strobe modes are manually controlled with buttons, I have an urge to crack open my 2 channel transmitter and put a little ASK radio in there. Nothing like the element of surprise eh? What I really would like to do is make it autonomous. 🙂 Maybe later..

There are a few modes in the sketch, the video shows the first or “main” mode, but if you download the sketch the possibilities are endless to make calmer or even more obnoxious ones. I have noticed (not from my rear view mirror thankfully) the new LED bars on cop cars have a faster mode (almost like a boost mode) for high speed or high attention ares ie: intersections, but when they have someone pulled over, it is a slower pattern. Trust me, I know these things.

There are 20 (red and blue in: each of the headlights, tail lights, sides, and 4 red and blue in the light bar) “straw hat” style LED’s and they are driven by an Arduino and powered by a 3.7v Li-Po battery, you can buy them at adafruit.com. There is not an actual Arduino inside, just a 328 programmed with the Arduino IDE. It’s way cheeper that way. (I tend to put 328 chips in a lot of stuff) Below is the sketch for your hacking. A really good tutorial on “LED blinky modes” can be found from Lady Ada here. I actually learned a lot from this tutorial series a while ago, but still reference it from time to time. Good stuff. 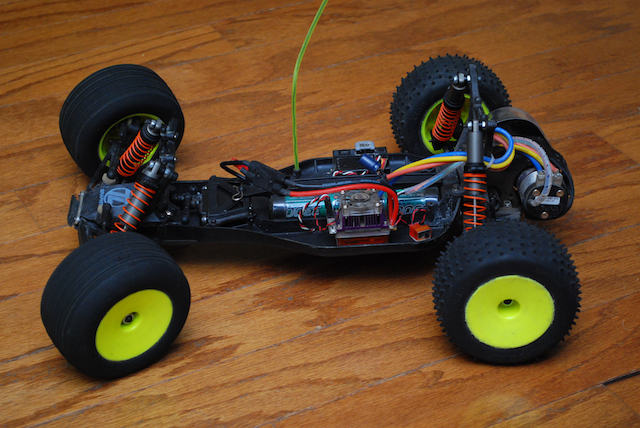